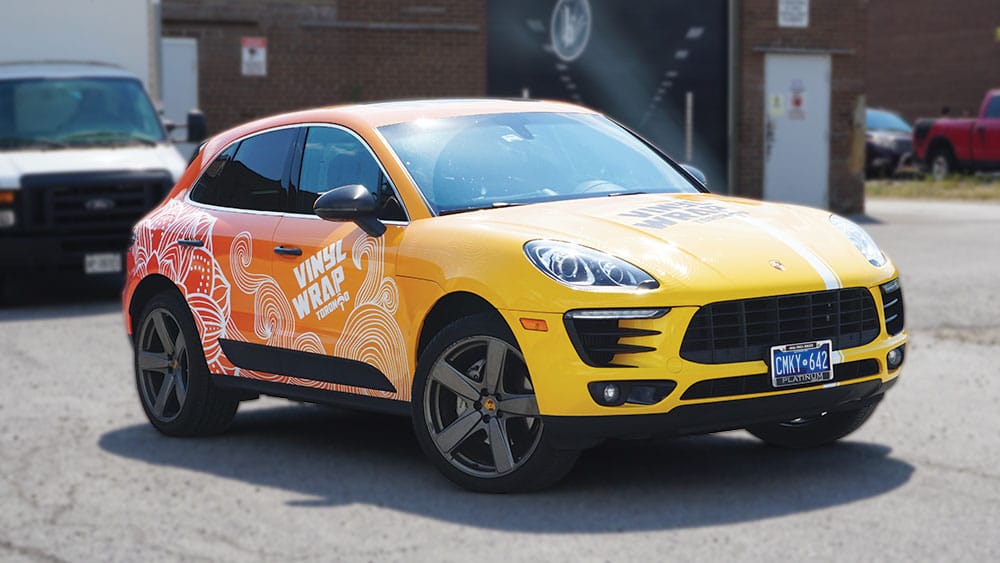 As we all know, inspiration can strike from anywhere. For Paolo, it was a picture of another vehicle that led him to end up with a gorgeous masterpiece on his Porsche Macan 2016. Like everyone else, after a while, he felt his Porsche needed an upgrade. Paolo has always appreciated patterns and colours that reflect creativity, and that’s what the output represented.

The picture he saw online was a vehicle wrapped with a certain pattern and colour. So, he wanted something similar, but with his own personal touch to it. Being a man of a free and open mind, Paolo likes to express himself. In this case, his Porsche Macan 2016 became his canvas.

His idea was to get a full car wrap with eye-catching colours blended in a smooth gradient, adding an underlay to create an embossed feel and to complement all that. He also wanted to add an overlay of a unique floral and wavey pattern in white vinyl. As you can see from the images featured on this page, his Porsche Macan 2016 went from a plain old black to an exciting and colourful work of art.

The process started with our designers, rendering Paolo’s vision onto a digital mock-up. This may sound easy, but it’s far from that. Every design request is different and it requires a creative and capable mind to mirror a client’s ideas into a digital file. Fortunately for our customers, Vinyl Wrap Toronto has a team of professional graphic designers with an interest and mastery in what they do. Our designers and Paolo communicated back and forth to get the design right. We believe communication is the key.

Although our designers can render any graphic that you can think of, yet sometimes it does not always turn out the way you want it to look. For example, in Paolo’s case. Initially, he wanted a wrap that featured 3 colours namely Orange, Yellow and Blue. It seemed like a good idea in his head, but when he saw what it would look like on the digital mock-up of his Porsche Macan 2016, he realized it needs to change as the fading colours meant that the blue and yellow mix makes green.

He did not feel this was a good choice. So, eventually, with his team of creative designers, he decided on an improved design featuring colours that complemented each other. This was a great example which showed our team’s co-ordination and advice with our customers’ best interest in mind.

Apart from getting a full car wrap for his Porsche Macan 2016, it was a great opportunity for him, as a customer, to see how smooth and organized his own company’s process is.

As soon as the design was approved, there’s a series of standard steps that every wrap job goes through. The steps are as follows:

Apart from using the best equipment and installation team to wrap the vehicles, we use the top quality material available on the market. We only use quality material offered by Avery Dennison & 3M. The reason is their wide range of colour options and the ability to last for years before surrendering to mother nature. All-in-all Vinyl Wrap Toronto does not compromise with quality.

Here at Vinyl Wrap Toronto, we’re always looking for opportunities to do something out of the box and our list of things to wrap is never-ending. Since we’re on the subject of Porsches, our team would love to get the opportunity to wrap the Porsche GT3s in the future.

Check out our post about the benefits of getting a vinyl wrap here. Things that make the process Faster

Get your vehicle picked up for free when you book a wrap worth $1500 or more.*

Get a free jacket decorated with your logo when you book a wrap worth $1500 or more.*

Claim either one of these offers!