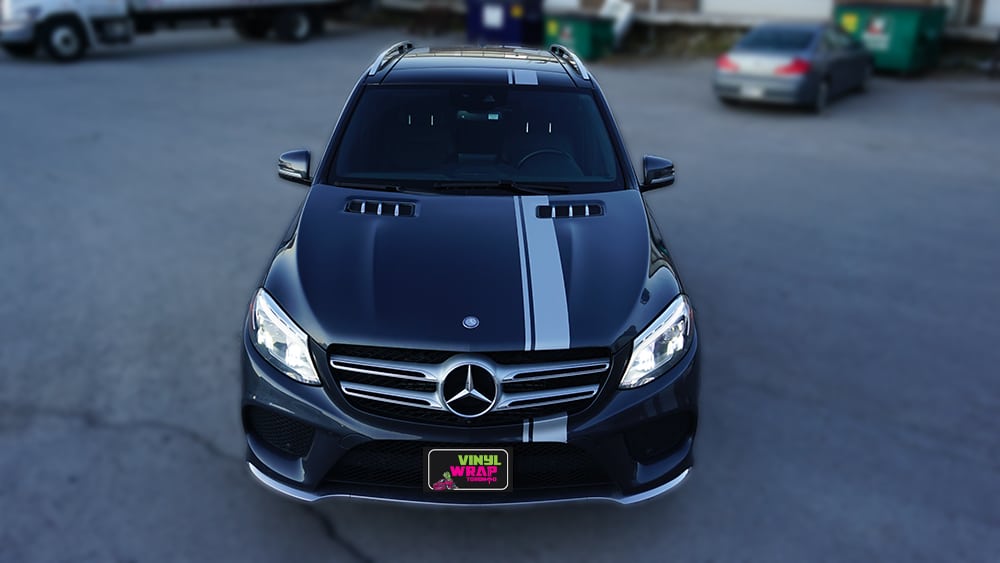 When you have a car that has started to show its age or simply does not interest you anymore. You’re left with two options and there’s no in-between. Either you could spice up the look of your car or get rid of it and get a new one.

Our recent client Mr. Hunter was in a similar dilemma. He was in a conundrum about his Mercedes GLE 350D. He could either fully wrap it or sell it and he had a plan for both of those situations. If he were to get a full wrap for his Mercedes GLE 350D, he had already decided on the design and colour of the material. All that was left was for him to make a decision.

After doing some thinking and discussing it with his spouse, he decided to do something entirely different than the original two options he couldn’t decide from. So, he figured out the happy middle ground that was to get racing stripes. Racing stripes won’t cost him as much as a full car wrap and is significantly cheaper than buying a new car.

For the stripes, he chose to go with the “Matte Metalic Silver”. The stripes go from front to back as well as on the sides and mirrors. Our installers started the work on the Mercedes GLE 350D and in no time it was done. Having been working in the vehicle wrap industry for more than a decade, installing decals is like squeezing lemons for our installers. Our client’s satisfaction is the source that allows us to toot our own horn like that. We’ve attached pictures of the Mercedes GLE 350D with stripes on this page for you to see.

We know we have done our job well when the client starts referring us to their friends and family. After we installed stripes on Mr. Hunter’s Mercedes GLE 350D, he referred us to his friend who contacted us and already discussing his requirements with our team. On top of that Mr. Hunter is also considering bringing in his wife’s car for a full wrap.

We appreciate Mr. Hunter for referring us to other people. It was a great pleasure working with him and we hope to be working more with him in the future.

Things to keep in mind while getting racing stripes:

Before you make an impulsive decision about racing stripes, ask yourself these following questions:

If the answer to any of the above questions is still uncertain, we advise you to contact experts and clear out your doubts. You may call Vinyl Wrap Toronto at +14168223232 or visit our garage located at 24 Ronson Dr, Unit 1, Etobicoke, ON, M9w1B4.

Our Team is always willing to discuss options and meet your needs. 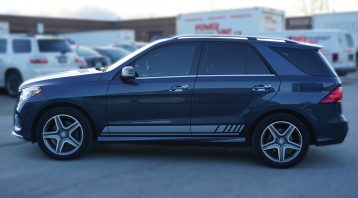